It’s been about a year since we started working on it. We first defined the dramaturgy based on the interview with Zen Master Wu Bong. Then we went through the huge amount of footage shot by Fabio related to Zen practice and decided how to use it. A further step has been to introduce another level of images, some evocative but mainly documentary shots, including the amazing family pictures which Adam Perl, Zen Master Wu Bong’s brother, shared with us. The last six months we spent on editing, trying out different solutions. We didn’t want to produce a strictly documentary movie, instead we tried to find a balance between different levels of communication that could result in a rich and inspiring experience. We’ve done our best and are very happy with the result: now it’s to the audience to judge.

There is one single issue still to be resolved. Music plays an important part throughout the film. We are very much thankful to Hayden Chisholm, whose work allowed us to have a high quality companion to all visual and spoken levels, helping us highlight passages and set the mood. We still have to address a copyright issue, for which we need two more weeks. At that point, around the first week of May, we will also be able to eventually honour our commitment to all supporter and send the promised perks.

What happens next? We believe we’ve been able to produce a movie that is able to speak to an audience not limited to those who have been close to Zen Master Wu Bong and are familiar with the Kwan Um School of Zen: the movie can touch the imagination and thoughts of a broader public, which we aim to reach through film festivals and possibly through tv stations. This the upcoming part of our work: promoting the film, which at some point might include proposing it on a digital platform. We already have list of tv contacts and festivals to work on. More on this to come in our next communication to you.

We would like to thank everybody who followed us and supported us in various ways throughout our journey. Should anyone have questions, please write to us: we’ll be very happy to respond.

Warm regards to all,
Fabio and Chiara

we’re refining the film titles and waiting for a wonderful singer to allow us use one of her songs. Everything else is done!

Let us share another bit of the film with you:

Warm regards to all,

we promised the film would be finished by the end of 2015: despite a light delay, we’re almost there. And a presentation at the Kwan Um School of Zen Berlin center, including some of our major supporters, is already planned.

The screening will take place on February the 7th at 14.30 pm at the Zen center.

We expect only light touch refinement after the meeting in Berlin, following which we’ll eventually be able to properly express our gratitude with the promised perks to all those who joined us in this journey.

Warm regards to all from Fabio and Chiara

“Don´t know – A Tribute to Zen Master Wu Bong” now has an official trailer. Here you can also get sense of the kind of music we´re using.

For more info on the musicians:

Dear friends,
Tomas Rautenstrauch kindly shared some footage with Zen Master Wu Bong he took in Paris in 2004/2006. You can find some excerpts in a 2 minutes video on our youtube channel:

Grateful to Tomas, we also would like to ask you: do you have any photo or video featuring Zen Master Wu Bong? Would you share it with us? We’re especially looking for images in informal contexts dating back before the year 2000.
This, too, is a very much appreciated way to contribute to our film. We cannot ensure the material you send to us will be actually used, but whatever images comes in, they will helpfully inform our work.

Dear friends,
the very first version of the film is ready!
It’s 67 min. long (still to be trimmed to max 60), and we’re quite happy with the result so far. 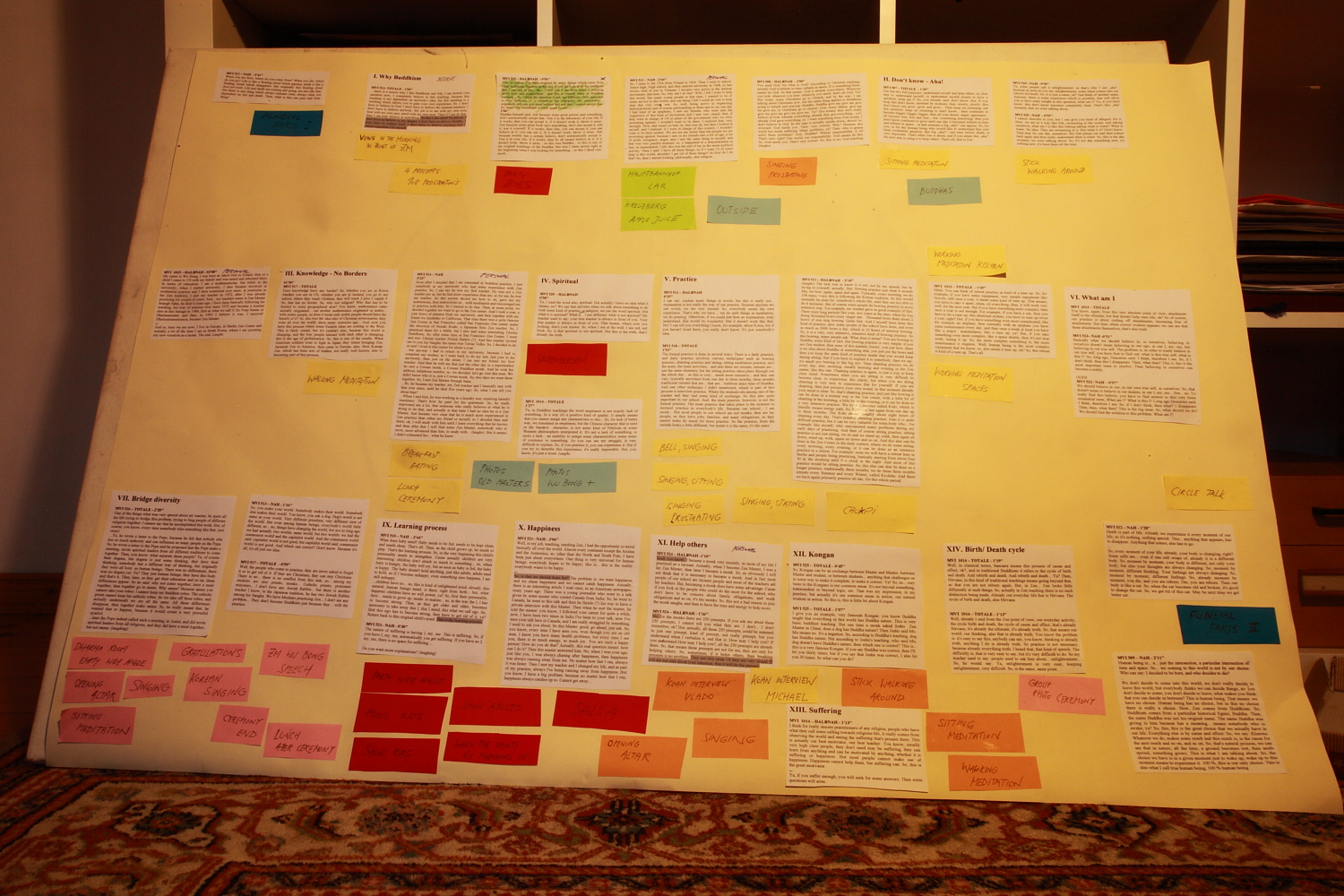 The photo shows a little piece of work that precede any cutting and editing: the arrangement on paper of all the video fragments in order to have a proper flow of discourse, matched with the footage of the various practices and of some informal situations.

We’ve now started working on a third track of images, these will be interpolated to ensure that visually the film gets engaging. We want to move away a little bit from Zen visual rhetoric, not because we don’t like it, but because its codified, expected images may affect the viewer’s attention. In a film a little bit of surprise keeps us alert!

Here’s a little update on what we have been doing in the last month.

As programmed, the work on the film has started! All footage (15 hours of raw material) has been reviewed: this includes images of Zen Master Wu Bong’s interview and of contour documentation featuring Kwan Um School of Zen’s various practices, celebrations and community life as well as indoor and outdoor images around Zen Master’s Wu Bong’s life. Subsequently interesting fragments have been highlighted, cut and indexed.
We’re now working on the screenplay: the interview has been reassembled in order to have a single thread touching on and intertwining the various spheres the interview addresses (personal life, practice, philosophy…). The interview, which constitutes the basis of the film, is now ready. The other footage fragments have been ordered to match the interview: a very first version of the film is therefor almost ready, though a lot of further work will be needed to refine it.
Most probably the following step will be to define, and possibly shoot, a third level of images, that will have to be woven into the given texture. More on this soon!

Dear friends, in these weeks we have been exploring some (compelling, we believe!) creative solution for our “Don’t Know”. We cannot share any detail with you now, as we’re awaiting some responses still, but hopefully we’ll be able to do so soon.
Meanwhile the fundraising continues on our website: we want to thank the American Sangha for its generous contribution.

It is true: in 2015 we will produce the film dedicated to Zen Master Wu Bong. We wish to warmly thank all who variously supported us, financially, spreading the voice, sharing materials or giving suggestions.

Here’s what happens next. We will take some more weeks to conclude the fundraising process, which includes continuing exploring the possibility of having official sponsors (like cultural institutions, airlines etc.) or co-producers (tv channels). This will terminate by February the 15th, at that point we will have a clearer idea of the budget we can count on and therefore of the kind of film we can afford. For now, thanks to all the 53 people from 14 countries who contributed, we’ve ensured the simple version of the film can be made: which doesn’t mean we’re going to give up our aspiration to make an aesthetically distinguished movie, able to speak to various audiences – both close to the Kwan Um School of Zen and not. We’ve already started to work on this, thinking of possible original solutions. More on this soon.

Beside the official fundraising, there is still a possibility to contribute individually: in the next couple of days we’re going to set up a link to our paypal account on our website www.dontknowfilm.com/ and of course you can make a direct transaction (please write to us for the IBAN: chiara.somajni@gmail.com, donderof@gmail.com.) If you think you have any friend who might be interested in supporting us and hasn’t done so yet, please share. Of course every contributor will be entitled to our perks. Please be patient – you’ll receive them as soon as the movie is ready.

Our warmest wishes for a bright new year,

Dear friends, in the last two months we were posting small thoughts by Zen Master Wu Bong and also reported about the development of our Indiegogo campaign to raise funds in order to produce a  documentary movie about his person, his teachings and about the Kwan Um School of Zen. Today, in less then 18 hours from now, our campaign on Indiegogo will end (you have still the chance to help us!), so we would like to thank everybody who supported, liked or shared our project!  In the next months we will continue to update the process of making Don’t know – A Tribute to Zen Master Wu Bong on www.dontknowfilm.com and also on our facebook page, so stay tuned!

In the Dharma, Fabio and Chiara